“We far surpassed ‘knee high by the 4th of July’, even with the challenges that we’ve had this year.”

Legends Seeds Agronomists share what they’re seeing in the field

At this point in the growing season, the difference between Envita™-applied and non-Envita treated plants in field trials has become plainly evident and abundantly visible. 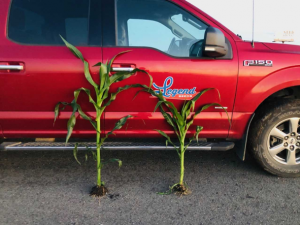 At several field trial locations in North Dakota, Claire Anderson, an Agronomist with Legend Seeds, has recorded her findings and, despite differences in moisture levels and overall growing conditions, her findings clearly support those observed in other Envita field trials throughout the corn belt.

One trial, located North of Minot, ND, provided evidence of the overall positive impact of Envita on plant height, health and root integrity. As illustrated in this comparison photo, the Envita treated plant is shown on the left. Of this field trial, Claire noted, “The Envita corn plants were two leaf stages ahead on average. They also had more fibrous root systems and were healthier overall.” Subsequent plant Nitrogen level measurements appear to confirm Envita’s Nitrogen fixing capability in corn.

The Envita treated plant yielded a Nitrogen level measurement of 3.99% while the non-treated plant measured 3.55% 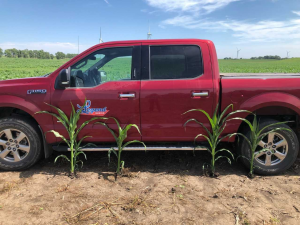 In another trial, Northwest of New Salem, ND the positive results – while not as visually apparent, were every bit as notable. While at first glance, the Envita-treated plants (shown on the right in this photo) and the non-treated plants appear similar in height, color, vegetative state, root mass and overall health, “The tissue test results”, according to Claire, “tell a different story.”

Nitrogen levels in the Envita treated plant measured 4.20%, while those in the non-treated plant were at 3.94%. 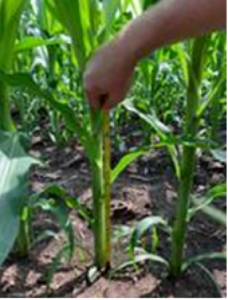 During Claire’s overall crop observations of the New Salem field test, she noted the Envita treated rows did contain more plants with tillers than the non-treated rows.

Claire Anderson is not the only Agronomist to observe, measure and report Envita’s strong performance results in corn. At Legend Seeds’ Lake Preston South Dakota Knowledge Plot, Agronomist Matt Caron shared observations with measurements to match. “As we examined our replicated Envita side-by-side trials,” said Caron, “we were in for a surprise as we had already been seeing consistently larger plants in the Envita treated corn for a while. But now it could be clearly seen from the field edge!”

While difficult to capture in a single field photo, Matt elected to take some physical measurements and provide supporting close-up detail photos.

Using a tape measure, Caron measured from the soil surface up to the last leaf with a collar emerging out of the whorl in the untreated corn. In most cases, the measurement was approximately 12 inches. 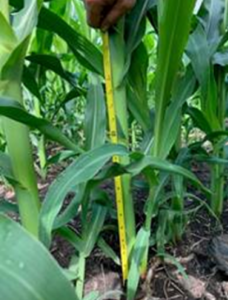 Matt’s photo showing an Envita treated corn plant root mass compared to that of an untreated plant shows significantly more small root growth in the treated plant. Caron said overall, the results in the Envita treated corn were remarkable. “We far surpassed ‘knee high by the 4th of July’, even with the challenges that we’ve had this year.”